You are here Home » Treatment in Turkey » Cities » Izmir

Izmir is the 3rd largest City in Turkey and the 2nd largest sea port.
Following the Turkish revolutionary war much of the city needed to be rebuilt; as a result the city today is an interesting mixture of modern High rise buildings with wide tree lined boulevards. There are still many traditional houses and chateaus hidden away to discover though.

Izmir enjoys a temperate climate with mild winters and warm summers, which is probably why the street life is so lively. A walk on the Kordon reveals an endless line of restaurants, Bistros, Bars, Coffee shops and Tea Houses all spilling onto the street. In many cases so close together it is often difficult to know exactly which place you are actually relaxing in.

A visit to Izmir cannot be complete without spending a few hours wandering round the Market Area of Kemer Alti. This is a bustling Bazaar where literally anything can be purchased. It is a confusing warren of small allies, dead ends, connecting squares, shopping centers, offices, workshops, cinemas, Mosques and just about anything else you can think of, there is even a renovated Karavan Sarai hidden in there. You are pretty much guaranteed to lose your way, but don’t panic you will find your way out eventually. 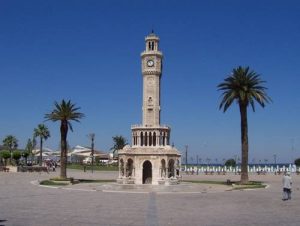 The culture park in the Alsancak district hosts the annual Izmir International fair, held every year in September. The rest of the year many other fairs and expos take place also. In addition to serving the commercial needs of the city the Culture Park provides a relaxing green area in the middle of the city for the residents to lay back, drink tea play Backgammon and smoke a “hubbly bubbly pipe” (Nagile) or even exercise on the running track.

The city of Izmir itself does not possess any beaches however a short journey to the North, East or South of the city will take you to either hustling tourist resorts, or quiet secluded peaceful beaches the choice is yours. 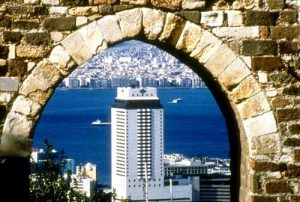 The region has been inhabited since 3000 AD so the area is rich in historical sites, these can be found within the city (Kadifekale – Bayrakli) but also within a short drive you can find Efesus, Pregamum, Sardis, Teos and many more places to explore.

Night life in Izmir is lively and getting livelier all the time, should you feel the need to rock the night away, you can find many modern Disco’s and Night Clubs around all running into the early morning

History and modernity, sun and see are all in one in Izmir.

We wish you already a nice vacation in Izmir.

This website uses cookies to improve your experience while you navigate through the website. Out of these, the cookies that are categorized as necessary are stored on your browser as they are essential for the working of basic functionalities of the website. We also use third-party cookies that help us analyze and understand how you use this website. These cookies will be stored in your browser only with your consent. You also have the option to opt-out of these cookies. But opting out of some of these cookies may affect your browsing experience.
Necessary Always Enabled
Necessary cookies are absolutely essential for the website to function properly. This category only includes cookies that ensures basic functionalities and security features of the website. These cookies do not store any personal information.
Non-necessary
Any cookies that may not be particularly necessary for the website to function and is used specifically to collect user personal data via analytics, ads, other embedded contents are termed as non-necessary cookies. It is mandatory to procure user consent prior to running these cookies on your website.
SAVE & ACCEPT