You are here Home » Treatment in Turkey » Cities » Istanbul

A pinch of New York, a sprinkle of Miami, a touch of San Francisco and a slice of Egypt … Mix all these ingredients and spice the mixture with Mexico city and then add the flavour of Vienna. There you have a taste of Istanbul!

With an unusual mixture of west and east, Istanbul fascinates its visitors. Istanbul reminds people of colourful bazaars, crowded malls, a mixture of East and West, tradition and modernity. Here in Bosporus, there are stylish hotels, old cafes, fabulous restaurants and several night clubs. Istanbul is a city of contradictions. The city embracing hundreds of features is indeed a story on its own that is an inspiration to tales, artists, poets and it derives from Tales of 1001 Arabian Nights.

Istanbul is a city based on two continents, Asia and Europe. These two continents are separated from one another with a Bosporus. The Golden Horn, a part of Bosporus, also divides the European continent into Northern and Southern districts.

In the Southern district, there is Old Istanbul. The most famous historical structures and works such as the Blue Mosque, Topkapi Palace and Hagia Sophia are in this region.

Istanbul: Shopping and culture. Enjoy this fascinating world city and its historical heritage in a single journey combined with your surgery. 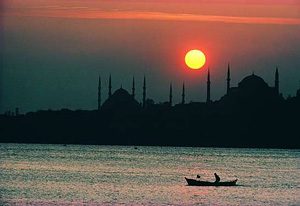 Istanbul has a very dynamic history: The city was built in the 7th century BC. At that time, it was called Byzantine. Thanks to its central position, Byzantine turned into a bright trading metropol.

After the division of Roman Empire, the Byzantine Empire had the possession of Constantinople and it went on being a political and cultural center in the region. The city was later on conquered by the Crusaders and thus Christianity was introduced to the city. Before its name changed and became Istanbul when conquered by the Ottomans, Constantinople had had a fall. This conquest meant a new rise for the city.

Istanbul is also a shopping stop. You will admire this great location with its historical and the largest Grand Bazaar as well as its countless ultimately modern shopping malls. The hospital is surrounded by four fascinating shopping malls.

Besides, remember to taste innumerable delicate in Istanbul. Thousands of elite restaurants serve you tastes in various kinds. You may find suggestions on shopping and restaurants in your personalized Medicaltravelpass.

This is not all; the city also offers you innumerable cultural activities that are an indispensable part of life in Istanbul.

We wish you a great vacation in Istanbul