You are here Home » LASIK-op » LASIK in Izmir » Technology

Behind the success and reputation of LASIK treatments in Kaskaloglu eye clinic, there is high technology as well as an experienced team.

The basic provision of having excellent results is a correct and sound diagnosis. Therefore, diagnosis systems in WaveLight are adjusted to the laser devices in the best way. By means of particular software, measurement results are transferred to the laser system and thus, an absolute and safe treatment is achieved in compatible with the individual needs of the patient’s eye in the perfect manner.

WaveLight Allegretto Wave Eye-Q 400Hz, is the most update, the fastest and the newest laser eye device accepted by American FDA (food and drug administration) on the market. 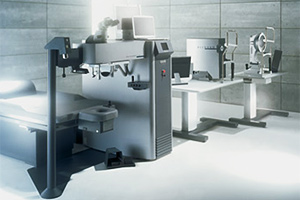 New Allegretto Wave Eye-Q has received the highest efficiency and success point and it is the safest laser system on the market with its 400Hz feature. 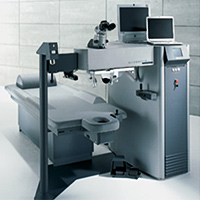 As our eye health influences our life quality, the fundamental principle of a successful treatment is safety. WaveLight laser devices have an innovative security principle: Perfect Beam Technology. This technology is developed in order to have a treatment application by considering all angles and slopes of the cornea.

Due to that all optical compounds are preserved in a way that environmental conditions such as humidity and heat cannot reach; the operation is closed to any undesirable exterior factors.

High-speed eye sensor monitoring the eye movements 400 times per second focuses laser beams completely and adjusts them in less than 6 millisecond. Therefore, the treatment continues in an eye-centred way even if the eye moves.

The treatment process is supported by preventing the dryness of the eye based on thermal influences.

Eye-Q, an advanced technology of Wavefront method, preserves the natural shape of the cornea and improves the night vision and contrast sensitivity (an ability to perceive similar colours such as seeing a grey cat at dawn) as well as it decreases the sensitivity against light reflections. This system offers about more than 20/20 (100%) visual ability after the treatment. This increased visual ability is called “Eagle Eye” as the eagle has more than 20/20 visual ability in day and night.

Eye-Q system has a frequency of 400 laser impulses per second. Therefore, the myopia or hypermetropia treatment lasts for about 8 to 10 seconds; that is almost the same amount of time required to fill a cup of coffee. It is seen that laser treatments with a shorter period of time require a shorter time for healing process and that the post-surgery infections and corrections appear less.

Why is it so much important to be treated with the most modern and the fastest laser technology?

1. Laser eye treatment applications with older systems have a 25 per cent mistake ratio. Patients treated with these older systems usually have the night vision problem.

2. In myopia and hypermetropia treatment, old fashion lasers disrupts the natural structure of the cornea. Besides, after the correction process, sharp points appear, making the perception more difficult. Our Wavefront optimized technology and professional team preserves the natural shape of the cornea thanks to the additional support of laser impulses.

3. The long period of operation in old fashion lasers requires a longer period of healing and as a result, the infection risk is greater and this causes corrections more or less. 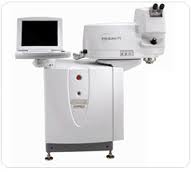 In Femto LASIK method, there is a Femto Second Laser in addition to Excimer laser. Previous applications were about removing a thin flap from the cornea layer by means of “a small planer” called micro-ceratome. However, in modern Femto LASIK application, laser micro-ceratome is replaced by femto second and thus for the first time, the eye treatment is operated completely without the use of a mechanic device. And the term “Laser LASIK” derives from that. In addition to the laser cut, the flap on the top cornea layer is removed and the sight deficiency is treated by correcting the cornea layer via Excimer Laser, just like in LASIK applications.

This method is especially suggested for the patients preferring a high sensitivity in laser application as they have doubts on having mechanic cuts on the cornea via micro-ceratome.

A successful treatment of the sight deficiency requires an exact and accurate diagnosis. Our hospital uses the newest Allegro T-Cat Topolyzer system. Thanks to its extra-ordinary resolution resulting from the great placido disk consisted of 22.000 measurement points, this new Allegro Topolyzer is the most ideal device for laser correction applications. Allegro Topolyzer is in perfect harmony with T-Cat software and Wave Eye-Q Excimer laser system. All required treatment and patient data is transferred to Wave Eye-Q laser from the topolyzer through the data transforms. And that makes it possible to calculate individual ablation profiles for every patient’s eye. And that means that our surgeons can change certain treatment parameters individually at any stage and it also provides a certain keratoconus diagnosis for us. 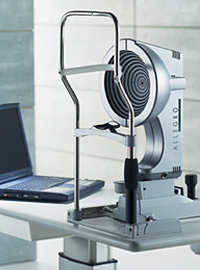 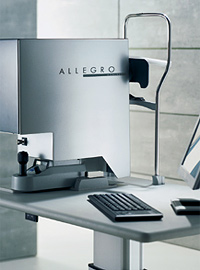 In order to attain a collaboration of the technologies and the best result, we also use Allegro A-Cat Analyser system. This analysis system is especially adapted for Wave Eye-Q and it enables for the surgeons to have wavefront measurements based on the Tscherning principle. And therefore, the surgeon can check whether the records are kept properly or that all the measurement points are valid. This method provides an advanced security against invalid measurements deriving from the local deficiency inside the patient’ optical system; and thus reduces the risk of wrong treatment to a great extent. Our hospital offers you a personalized laser treatment with the latest technology that makes it possible to apply all kinds of laser treatment by means of aberrometer method.

This micro-ceratome makes it possible to have a very delicate cut of the cornea layer as well as to decrease the average flap thickness to 90 microns from 130 microns. Micro-ceratomes are of single-use for every patient.